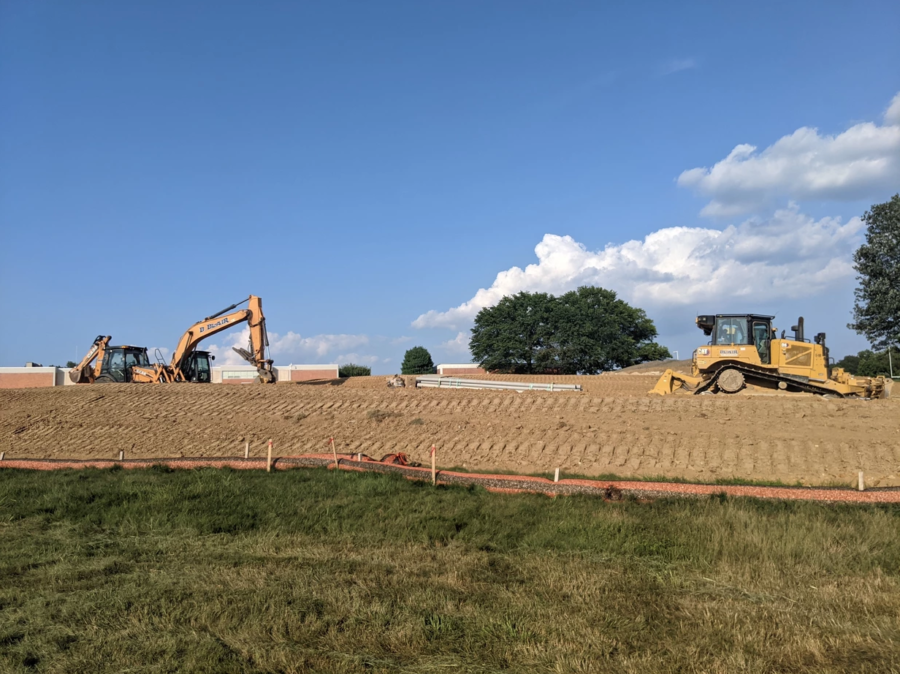 Construction in progress on the campus of LMHS.

The Lower Moreland School District has appointed the two-year task of documenting the construction of the new high school to a team of Lower Moreland students. The student documentary team has already begun to record information, capture footage, and write about the new high school,which is expected to be finished by Fall 2023. Until then, it is up to the team to create a 60-90 minute film from start to finish.

Construction of the new high school is underway, with fences having been installed to ensure the safety of the public from entering the construction grounds. A new driveway has been put in place, and construction workers will be installing the plumbing, electrical, and various mechanical systems as soon as the final required building permit is received.

Asked about the status of the documentary, Sophia Zalipsky replied, “The new Lower Moreland High School Documentary Team will be releasing its website by the end of this month. The team already released the first promotional video at the August 17th board meeting. The team is producing a student-run television show called LMTV Live. The team filmed the show’s first segment on September 8, 2021. This exciting and informative segment will be released on the website. Look for Season 1, Episode 1, “An Interview with LMTSDSuperintendent: Dr. Scott Davidheiser,” to be released soon. In this premiere episode, Dr. Davidheiser was interviewed by Aubrie and Avery with Sophia and Melania Zalipsky on camera.

The first episode will be dedicated to Forrest Keys and Leonard Sassaman, two alumni who passed away in 2021.

The new high school is an important step towards bringing about change to the district and community. After a series of demoralizing racial incidents over the past year, the community has become more divided than ever. Dr. Davidheiser hopes that this new high school will allow the community to have a fresh start. The Documentary Team hopes to celebrate the diversity ofLower Moreland and unify the community.

Members of the community can submit their questions, comments, or suggestions to the team’s email. The documentary team is looking for students’ viewpoints on the upcoming changes to their school district. It will be a major shift for the student body, so it is important for the Documentary Team to reflect those perspectives. The Murray Avenue building will be demolished once the new high school is complete. The Lower Moreland Middle School will relocate to the site of the original Lower Moreland High School as a 5-8 educational institution. Meanwhile, Pine Road will revert back to a K-4 elementary school.

If students attending LMHS are interested in joining the Documentary Team and would like to be a part of this historic project, please contact Sophia Zalipsky and Dr. Davidheiser.