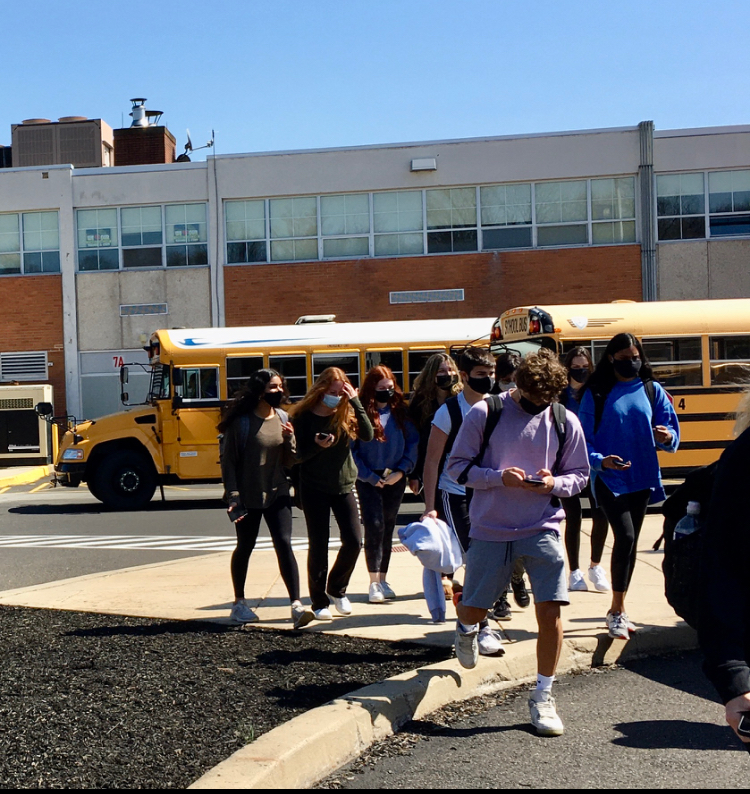 Juniors and seniors walk to their cars at the end of the school day.

With around 62 percent of students at LMHS now attending school in-person, the school feels different than it did just a few months ago. An unfortunate ramification of this influx of in-person students is a feeling of exclusion by some virtual students. Some of these students have noted that teachers pay less attention to them, which results in less opportunities to participate in class discussions. In addition, many virtual students have noticed a lack of social interaction.

Conversely, an overwhelming number of in-person students listed the ability to see their peers as a positive factor. Approximately 80 percent of the students I interviewed have found it easier to focus on classwork. On the other end of the spectrum, Adriana Ciuciu, a sophomore, summed up the frustrations faced by virtual students, saying, “A negative aspect of staying virtual is having to look at a screen for the vast majority of the week days, and isolation from others since virtual students do not get the same chances to interact with friends.”

The new schedule has presented challenges to in-person students as well–mainly a sudden decrease of sleep. Sophomore Victor Linetsky highlighted this seemingly popular complaint of in-person schooling: “My sleep schedule is a lot worse due to me being used to getting a lot more sleep when I was at home on Tuesdays, Wednesdays, and Fridays.” Despite these drawbacks, however, in-person students receive the benefits of a more interactive learning environment, as Noam Abraham pointed out: “In-person learning allows me to talk directly to the teacher and ask questions relevant to the learning without interfering with an online lecture.”

Now let’s take a look at some teachers’ perspectives. Mr. Dominick notes that most of his classes have not experienced significant gains in terms of in-person attendance allowing him to “get an equal distribution of in-person and virtual students involved when having discussions, reviewing vocabulary, and so on.” More than half of the students in his American Studies class now attend in person, however, causing him to “sometimes struggle with involving the virtual students on a consistent basis.”

Mr. Gaw made similar points, saying, “This has been a challenging year for teachers. Every assignment or activity requires modifications for virtual learners, but the hardest part is trying to generate the student interactions in a mixed model that makes learning more real and teaching more fun.” He explained, “There is definitely more interaction in the classroom now and I have to remember to keep the virtual students involved. My attention is naturally drawn to the students who are directly in front of me in class, so it’s great when virtual students offer to answer a question or hit the little hand raise button on the Google Meet.” Although students and teachers are still adapting to the changes, they are all striving to attain the best possible learning environment.