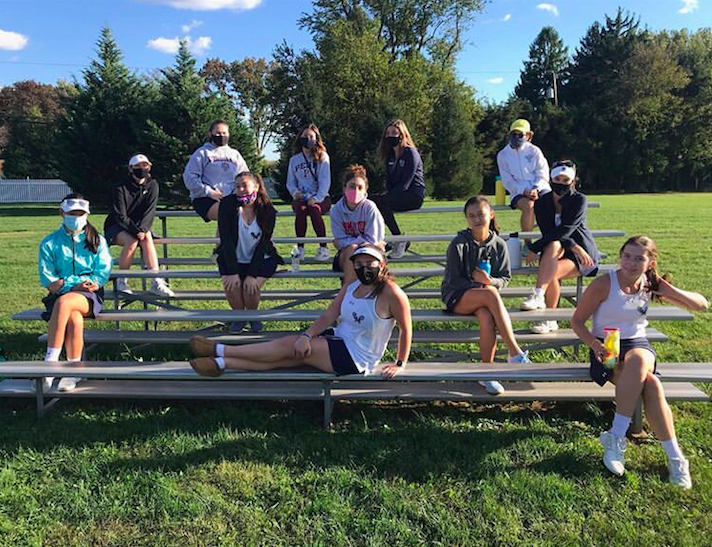 Despite losing eight seniors on Varsity and a key player, the Lower Moreland Girls Tennis team stayed optimistic and overcame multiple setbacks during the 2020 season. Coaches Hausman and Titus were instrumental in helping the girls adapt to the new Covid guidelines and safety precautions, while rebuilding the team with high hopes for the future.

The team had a successful year, winning the league championship and moving on to Districts. Sarah Kideckel, first singles, won the SOL Freedom Division Singles Championship on Friday, September 25. When asked about her win, Sarah revealed, “It felt very special winning the SOL Freedom Division Singles Championship, I was also extremely happy.” Sarah has shown much resilience and determination, knocking out the competition, and she is only a sophomore!

And speaking of knocking out the competition, on Saturday, October 3, doubles teams Madison Sopinsky and Erica Stone along with Lexi Moore and Anya Yang played in the SOL Freedom Girls Doubles Tournament. Both teams fought their way to the top and faced off against each other in an all-LM Final. After an extremely close match, Lexi Moore and Anya Yang won the doubles tournament, representing Lower Moreland High School.

This year’s team shows a lot of promise and has a strong sense of camaraderie, but none of this would have been possible without Erica Stone and Aryn Chartock, this year’s Lower Moreland Girls Tennis team captains. Both Erica and Aryn have been great leaders, overseeing team warmups, selecting team apparel, and bringing the team together.

The Lower Moreland Girls Varsity team won in their first round of Districts against Gwynedd Mercy 5-0, making it to the finals against Delco Christian. The team put up a good fight, but unfortunately lost to Delco Christian, 2-3.

At the Individual Districts Tournament, Sarah Kideckel, singles, and Lexi Moore and Anya Yang, doubles, competed, giving it their all. Sarah got out in the first round against Ashley Gomes, who ultimately won the singles competition. Lexi Moore and Anya Yang made it to the finals for doubles, receiving second place overall in the Individual Districts Competition.

Although they did not make it into States, the girls tennis team expects to have an even better next season, with the addition of a few new promising tennis players. The future looks bright for the Lower Moreland Girls Tennis team.