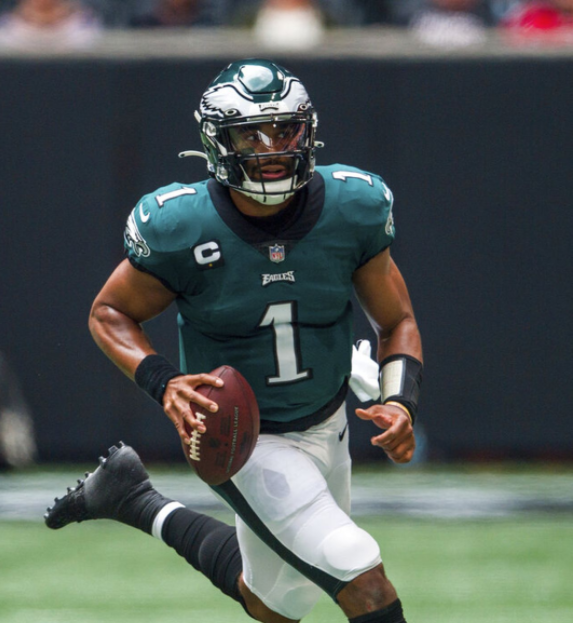 Jalen Hurts, quarterback for the Eagles, runs with the ball

In the NFL’s first year with a 17-game schedule, the Eagles have now passed the halfway point. After losing to the Los Angeles Chargers on the first Sunday of November, Philadelphia’s football team stands at a measly 3-6. So, how did they get to this point?

Coming into this season, the team and its fanbase knew that there were more question marks than ever before, whether they wanted to admit it or not. The new coaching staff, led by Head Coach Nick Sirianni, is entirely inexperienced, with not a single coach on the staff having any prior head coaching experience. The team also put their faith in the new face of the franchise, Jalen Hurts. While Hurts showed signs of stardom in the four games he played in 2020, that was not enough to solidify himself as a starter. Because of all these changes, fans knew the team was most likely in for a struggle.

The season started out strong with a dominant road win over the Atlanta Falcons, where the defense held the Dirty Birds to only six points. After this early sense of jubilation, the Eagles were brought back down to reality, losing the next three games by relatively large margins. The team then traveled to North Carolina, where they were able to narrowly beat the Panthers, who were 3-1 at the time. The following week, they traveled back to the city of Brotherly Love to face off against the defending Super Bowl Champions, the Tampa Bay Buccaneers. Sirianni’s team fought hard, but in the end they came up short. After this Thursday night loss, the Birds traveled to Sin City, where they were dominated by the Raiders. This frustration was short-lived, as they traveled to Detroit to play the worst team in the league, the Lions. They finally were able to get back to winning form by rushing for 236 yards. In week nine, the team put up arguably its strongest fight of the season, but ultimately fell short, losing to the Los Angeles Chargers 27-24.

There are multiple reasons for this poor start to the season. The coaching staff is still growing week by week, and struggles in areas an experienced staff would not. Defensively, the line has stumbled throughout the season following the loss of star defensive end Brandon Graham. The defense, led by coordinator Jonathon Gannon, is on pace to give up the highest completion percentage in NFL history. This is simply a record no one wants to claim. Offensively, rushing the ball has led to great success, but the inconsistency in the passing game continues to hurt the team. With great young talent, the offense looks promising, but is not effective enough to win games this year.

The team traded away its franchise legend, tight end Zach Ertz, prior to the trade deadline, alluding to General Manager Howie Roseman’s motivation to build draft capital as opposed to winning in the present. Philadelphia already has the best draft capital in the league, owning their own first round pick, the Miami Dolphins first round pick, and a conditional first round pick from the Colts. If they are able to be successful with these draft picks, the franchise has a bright future. But for now, the team is in a state of disorder.

With eight games remaining in the 2021 season, the Eagles have the third easiest strength of schedule. This opens the door for a possible playoff run if they are able to seize the opportunity. As Jalen Hurts said before the season “I know that rent is due everyday . . . and when that rent is due, I don’t plan on missing payments.” It will be exciting to see if Hurts and the birds are able to pay their rent down the stretch.