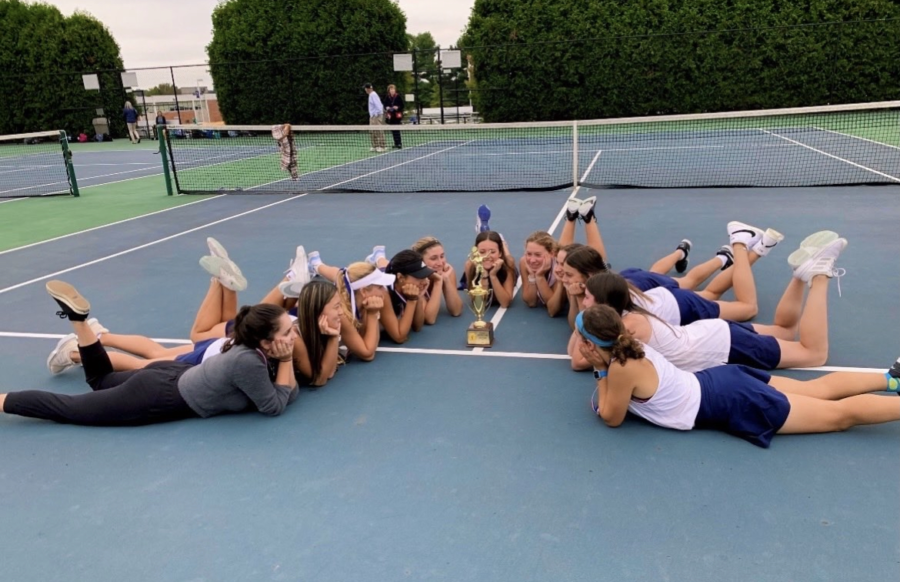 The team back home with their well-deserved trophy

On Friday, October 29, the Lower Moreland Girls’ Tennis Team made their way to Hershey, PA, to compete in the State finals. Under the new leadership of Cliff Raben, the Girls’ Tennis Team thrived this season, maintaining their undefeated record and earning a seat in the PIAA States Competition.

In the quarter-final at Hershey, Lower Moreland went up against Trinity, dominating across the board. Hannah impressively won (6-0), (6-0). Rebecca won (6-0), (6-1), while Sarah won (6-2), (6-3). As for the doubles teams, Erica and Madison won (6-1), (7-5), while Catherine and Anya won (6-1), (6-3).  The day after their victory in the Quarterfinals, the girls celebrated by going to Hershey’s Chocolate World, where they had a well-deserved blast. Afterward, they competed in the Semifinals against Sewickley Academy. The girls put up a good fight, but ultimately lost in the end.

Hannah lost (2-6), (0-6) and Sarah lost (1-6), (0-6). Rebecca fought hard in her first set, winning (6-1). In the second set, however, she lost (4-6) and lost (6-10) in the tiebreaker. The doubles teams gave it their all, but in the end, the other teams were simply too good. Erica Stone and Madison Sopinsky lost their first set (3-6). In their second set, although they mounted a comeback, they ended up losing (4-6). The second doubles, Catherine Lemiasheuski and Anya Yang, lost both sets (2-6), (3-6). Although they lost, Catherine and Anya truly gave it their all. The loss in the Semifinals was the team’s  first and only loss this season, ending the season with a record of (17-1).

Although the LM Girls’ Tennis Team did not make it to the finals, they are now recognized as one of the top four 2A girls’ tennis teams in Pennsylvania, and they displayed great potential for the seasons to come. The future looks bright, indeed!